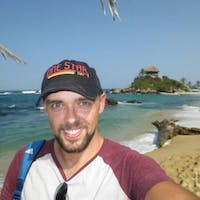 You would like to learn a new skill | Sink or swim

The current Covid landscape has shattered reality for many people. Where some had comfortable careers and businesses, the rug has been pulled out from underneath them.

Redundancies are nothing new but in a world where entire industries have been paused indefinitely (e.g. the Arts), professionals have had to adapt to survive lest they form an orderly queue to the nearest welfare office.

Upskilling or reskilling is nothing new but when it has been enforced it can cause huge fear and uncertainty for many - not least those with significant financial obligations.

I once read that people live abroad for one of two reasons. Inspiration, or desperation. Extreme examples may be an inspiration to live in Spain after reading 'Don Quixote', or fleeing war-torn Libya for safer climes as a refugee.

When I think about my own impetus - changing career mid-stream as a software developer - my initial compass was triggered through inspiration. Learning new skills opened my eyes to a world where I could apply colour and art to bring my ideas to fruition on the web.

However, inspiration isn't enough. Just ask attendees of a Tony Robbins concert/seminar. Getting psyched up can only get you so far. A deeper underlying need to change is what will fuel your journey. Note the difference between Need, and Want. We need air to breathe. We don't necessarily want it.

Desperation can be your ally. College students with assignment deadlines a couple of days away will attest to that. Inspiration is the more attractive, and daring sibling. Desperation, with its grunt effort and cold detachment doesn't win many plaudits. But, it gets the job done.

How to turn desperation to your favour? Burn bridges. Cut the safety net. Risky? Yes. Does it work? Absolutely. When you have mouths to feed, you'll find a way.

I don't necessarily advocate quitting your job and going 'all-in', but at some point a leap of faith is needed to cross that bridge into uncharted land. Comfort kills. Perhaps not literally but it can be the death-knell of a budding career in something else.

Photo by Christopher Ruel on Unsplash